I present the model to which I contributed in a research project at MIT (Boston), in a CNRS and MIT laboratory. It is the subject of a scientific publication “A minimal power model for human running performance” which I co-authored with Thorsten Emig and Matthew Mulligan.

The purpose of this article is to explain the main features of the model and how we calculate your training speeds in the RunMotion Coach application.

The Velocity at VO2max (vVO2max) is the velocity, at which the runner consumes the maximum amount of oxygen (the VO2max). In concrete terms, above the vVO2max, the runner exhausts himself very quickly. Studies show that a runner can hold his vVO2max between 4 and 7 minutes, this is the support time for vVO2max.

There are 2 types of endurance: short and long distances

I present below my own performance curve with all my personal records. 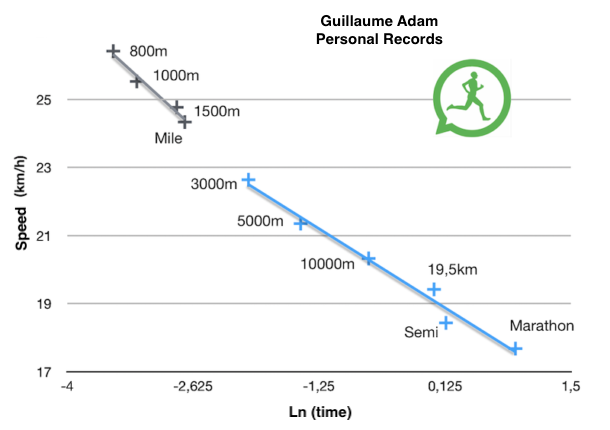 We can see in the graph that it is possible to group these points into 2 groups.

This 6-minute time is not fixed and corresponds to the crossing of the 2 straight lines. This point (with the coordinates Vm and tc in our model) is close to the vVO2max and the support time of the vVO2max: 22.9km/h for me.

The flatter the slope, the longer the runner is able to hold a given intensity, the more enduring he is.

Although it may seem surprising, endurance does not depend in the level of the runner. 2 runners in 2h30 and 4h at the marathon can have the same endurance while the runner’s vVO2max in 2h30 is higher than in 4h.

What are the limits of our model?

If the runner does not have references over this large range of distances, we can set certain parameters and focus only in short (less than 6 minutes) or long distances (more than 6 minutes).

This is what we do in RunMotion Coach, taking into account only races between 6 minutes and 5 hours, since our users perform in the vast majority of road and trail races.

Moreover, it is necessary that these races are consistent, i.e. carried out with maximum effort and an equivalent level of fitness and form.

My curve (in the graph) is interesting, since one can clearly distinguish my best races: the 1500 meters, the 3000 meters and the “Duc’s Race” (a 19.5km in the road, probably my best performance on the road), since they are above the 2 lines.

On the contrary, the 1000m, the 5000m and the half marathon are well below. These 3 distances are the ones that I optimized the least in competition or realized in seasons where I wasn’t in great shape. Thus on half-marathon, the model predicts 1h06’26 to me, 2 minutes better than my current record.

Note that in the marathon, I applied a correction coefficient to take into account the 250m difference in altitude of the New York marathon. A German coach compared performances over hundreds of races with and without elevation gain and gave coefficients to be applied to the positive and negative elevation gain to calculate an equivalent flat speed

The difference in elevation is taken into account in RunMotion Coach and we even increase these coefficients on the trail to take into account the technical nature of the course.

In addition, when the runner has races that are not at the same level of performance, we apply a filter to remove the “worst” races: those that are well below the line. This is typically the case when the weather conditions are not ideal: too hot or bad conditions.

The last limit for the sprint in the model is no longer valid and for very long efforts, more than 4 or 5 hours, other factors deteriorate the performance, first of all muscular fatigue and central nervous system fatigue.

How to calculate your training paces?

You may have already seen tables of % vVO2max for intervals. For example running a 1000m at 90% of the vVO2. The problem with these tables is that it only works if you have “classic” endurance.

With our model, the paces are calculated directly for the theme of the session. For example, a 6×1000 meters session at 10km pace will directly take your theoretical time over 10km. Moreover, we apply a progression to the paces when you want to beat your record.

My practical recommendations to get the right training paces

If you think that the training paces in the application are too low or very high, I invite you to contact us (via contact at the bottom of the page) to see what vVO2max and endurance the model has calculated and we can modify them manually if needed. It happens that in some trails, the coefficients taking into account the altitude difference do not replicate well the technicality or the weather conditions.

I recommend that you enter at least 2 of your best performances over distances that are twice as long as each other. For example 5km & 10km, 10km & half marathon, or half marathon & marathon.

To conclude, I would like to point out that in the 1980s, Peronnet and Thibault had already highlighted this linear relationship between speed and the Naperian logarithm of the time over long distances. The endurance index is calculated in this way :

There are sometimes variations, with the 6 replaced by a 7, depending on whether you take the vVO2max support time in 6 or 7 minutes.

Go further with our model

If you want to know more about our model and find all the mathematical formulas 😉, I invite you to read our scientific publication “A minimal power model for human running performance”. The model has been validated in thousands of runners.

From this model, it might even be possible to detect abnormal performance (doping) or detect high potentials. Also, we can see if to optimize a performance, it is preferable for a given runner to develop his vVO2max or endurance as a priority.

In addition to applying to the personal scale, the model applies to world records, as I wrote in this article. Moreover, the world records of half marathon and marathon seem to benefit from the latest technological advances in terms of footwear.